This is awful news, my heart goes out to his family :(

Gee whiz... My heart goes out to his family. A very funny man, and a very good man. He will be missed.

When SpongeBob first began airing, I had no idea who Tim Conway was. My mother would mention that he used to be on The Carol Burnett Show (which she loved growing up) and McHale's Navy (alongside Mermaid Man's Ernest Borgnine). It wasn't until I graduated college that I began to discover his work from the 60s and 70s on YouTube. Please check out some of his older stuff, you'll thank me later.

85 is a long, happy life, so there’s no need to be too sad. I’m just starting to get worried about the length of the “Dedicated to” portion of Wonderful Sponge’s credits.

Eerily, I was mentally preparing myself for this news just two nights ago for reasons I couldn't explain. Not trying to freak anyone out, I've just been expecting this kind of stuff more, especially with older celebrities, since the unfortunate passing of Stan Lee. Rest in peace to this great man.

He's in the "Home for Infinite Winners" with Ernest Borgnine and Stephen Hillenburg now. R.I.P.

R.I.P. Now he is in heaven with Stephen Hillenburg and Ernest Borgnine. 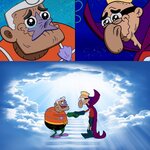 I heard about the news yesterday just last period at school and I just couldn't believe it. Both of our favorite underwater heroes have now passed on. The good thing is, however, is that at least Barnacleboy is fighting crime up in heaven with Mermaidman. May Conway rest in peace. RIP

R.I.P to one of the many people that made spongebob great, thank you for all that you've done mr. conway!

WHAT TYPE OF PLACE IS THIS YEAR?

Octavionknox888 said:
WHAT TYPE OF PLACE IS THIS YEAR?
Click to expand...

Same place as usual. Another year.

Nickelodeon should have done something also considering how much Mr. Conway meant to them and SpongeBob

The fact they didn't was disrespectful on their part IMHO

Mikurotoro92 said:
I was watching TVLand and they did a tribute to Tim Conway

Nickelodeon should have done something also considering how much Mr. Conway meant to them and SpongeBob

The fact they didn't was disrespectful on their part IMHO
Click to expand...

Maybe they will do it eventually?

ssj4gogita4 said:
Maybe they will do it eventually?
Click to expand...

I wouldn't expect Nick to do a tribute to Tim (or Ernest, for that matter). Stephen, maybe (but I don't have cable, so I didn't follow the news much after his death).

If Nick had a tribute for every actor or actress of every bit-part in their shows... well, let's just say that's unfeasible. TVLand makes a lot more sense, because that's their bread-n-butter: old shows with old stars. Not to mention that outside of us diehards, most SponeBob viewers neither know nor care who Tim Conway is. Not so for my parents' and grandparents' generation.