Discuss this SpongeBob episode that The LMAO House ripped off.

I can't be the only one who thinks of that Loud House episode that aired last week when i hear that name? right?

This will be interesting...

This was an alright episode. The Rock Bottom cameo was amazing but after I while I kinda got over the main joke of the episode and some of the humor fell flat. Not bad though.

The plot of this episode seems ridiculous. Just the plain fact that Mr. Krabs is trying to kill off Squidward just to make some money is sick. I don't mean that like an over-the-top reactionary Mr. Enter fanboy (Like the guy who reviewed WhirlyBrains on that infamous Deviantart account), I just mean the actions of Krabs was pretty cruel, and out of character. Granted, I am pleased that Krabs is trying to get rid of Squidward for once, instead of SpongeBob (Like in SpongeBob, You're Fired), because that logic makes him dumber than he was in Company Picnic.

Now, while I hate Krabs in this episode, and his part of the plot, I do kind of like Squidward's part of the plot. I think it's interesting seeing Squidward make a bunch of deliveries to far-out, unique different places (We'll get to that in a bit), but even then I feel as if that part of the episode couldn't really be saved. 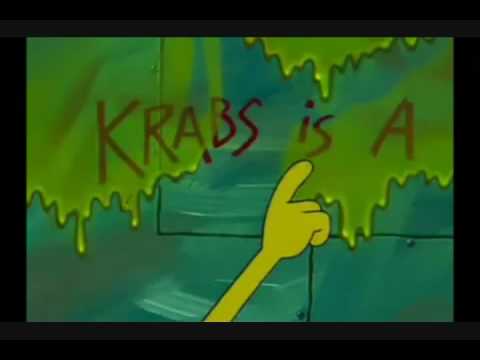 Just, how do I even explain it!? I understood why Krabs was written as a jerk in Mutiny on the Krusty. That made sense. It was an episode parodying an adventure on a pirate ship, and Krabs was written as the ruthless, in-your-face captain. But this episode? Just...what is this!? People tend to flip out to how he drove Plankton over the edge in One Course Meal, but I bet you 10 bucks that no one is going to mention how Krabs tries to kill Squidward in this episode! Sure, at least it's for money, and not out of his own happiness (Like One Course Meal), but still, his actions are just as bad! He never intended to kill Plankton by scaring him, but he is attempting to kill Squidward in this episode. And I'd find that alright...if it was funny. This episode is really unfunny. I don't know, it just feels bland, and a bore. It's not like Patrick's Coupon, where the episode relied mostly on animation for its comedy. The main "jokes" in this episode are mainly what happens to Squidward when he goes to these rough places to make a delivery. Nothing funny happens though. I like the change of scenery, but still, there's nothing funny about these scenes. Maybe the Mars scene is a little chuckle worthy, but still, it's just not funny. Squidward was already blasted off in a rocket in a much funnier, better fashion in Unreal Estate! So, the whole "shock value" of Squidward being blasted to Mars just doesn't do it for me. Oh, and Krabs' scenes aren't funny in the slightest. I don't find anything funny in these scenes if you ask me.

Now, I will admit the whole "Out of the Picture" premise is clever. It is a clever element brought into the episode, in order to help Krabs get his money back. Regardless, the execution of it is a failure. Now, back to the jokes, there were only a few jokes that were actually funny. Some of Squidward's paintings were funny, and well drawn, Larry's eyes catching on fire was a hilarious highlight, and the ending is very funny, and a great way to wrap up the episode.

That being said, what about the part where Krabs chases Squidward? Well, it's boring. Nothing is really "exciting", it's either boring, or frustrating. Krabs is completely out of character in this episode. Sure, he mentions that he's sad for what he had to do to Squidward, yet he then chases Squidward trying to kill him with the mallet afterwards, the worst part of the episode. There should've been some sort of comedic value that would've came out of this, but no. There's not a single funny joke that comes out of it. It's a scene of pure lazy writing. Characters being out of character, the jokes being campy, and predictable cartoon gags that have become outdated decades ago. This scene is probably one of the worst scenes in Season 10 (Definitely worse than anything in Season 9b!).

Then, we get to the part which I have mixed feelings on. The part where Krabs and Squidward destroy the restaurant. In one way, it was lazy, and boring, but in another way, it was a good way to set up the ending. I don't have a real opinion on this scene. I like it, but I don't like it. It's hard to describe.

Of course, I think you know my opinion of this episode, it's a Bad Episode.

Not the worst this series has to offer, but definitely the worst in Season 10. I never thought I'd hate an episode from Season 10 this much.

am i the only one that liked this episode that much

this one was on the weak side of good. much much better than patrick's coupon. it wasn't very funny though. i was more excited than i thought i could be about seeing rock bottom again. xD

McSponge said:
Maybe if they decided to use Cel Animation (You know, mix up the animation styles) for Rock Bottom, and it's citizens, that'd be cool.
Click to expand...

The technologies don't allow for this to work. The shows today don't use cel.

Even Rock Bottom couldn't save this episode. Mr. Krabs is more sick and twisted than he was in One Coarse Meal. I think this is one of the worst episodes of the show.

EDIT: I missed the line "I did everything I could to get you away from here safely". That makes it a bit less bad.

I liked this episode. A lot. I found this hilarious! I laughed the whole time, and the Mars part was really funny. But what really makes this great is, well, two words: ROCK BOTTOM. They brought back ROCK BOTTOM, AND for a HILARIOUS SEQUENCE. And then there's that art guy, that was funny. And the scene of destroying the Krusty Krab was amusing. And I liked how Squidward actually gave people the food, and how the fake address in ROCK BOTTOM was actually real. And the ending was good. How do people dislike this episode!!!!????!!!!???? I love this episode, 10/10

It's good but not as good as the Loud House episode of the same name.

Both episodes are on the relatively low side of good for me, but they could be so much better.

I'm surprised this episode isn't hated tbh. It's pretty much a combination of One Coarse Meal and Demolition Doofus.

Wintermelon43 said:
I'm surprised this episode isn't hated tbh. It's pretty much a combination of One Coarse Meal and Demolition Doofus.
Click to expand...

Idk, I feel this episode doesn't take itself nearly as seriously.

No just no it's a ScumBob episode I'd suggest they should cancel spongebob before more bad episodes come, it should've been canceled after the first movie

The plot of this episode seems ridiculous. Just the plain fact that Mr. Krabs is trying to kill off Squidward just to make some money is sick. I don't mean that like an over-the-top reactionary Mr. Enter fanboy (Like the guy who reviewed WhirlyBrains on that infamous Deviantart account)

I actually support that guy's review, we both found Whirlybrains disturbing.

I initially called this episode good, but now I think I should watch this a couple more times for my final opinion.

Amphitrite said:
I initially called this episode good, but now I think I should watch this a couple more times for my final opinion.
Click to expand...

I might have to as well, but I feel it falls a lot more into the humorously dark category. Mr. Krabs is clearly painted as the villain, and he does get his comeuppance at the end - his restaurant is destroyed, he makes no money, and he gets hung up on a wall. There are definitely reasons I feel others would dislike this episode, which are perfectly reasonable, but it's definitely one I plan on rewatching a little later.

I'm pretty sure only dogs can hear the sound i made when Rock Bottom showed up. Even outside of that, I really enjoyed this one. It felt kind of Classic with the various ways Mr Krabs tries to get rid of Squidward. I was worried it would get dark but thankfully it didn't actually have Mr Krabs try to kill him....until the end but both he and Squidward got amusing comeuppance at least. So yeah, a solid surprise.

Perry The Platypus said:
I'm pretty sure only dogs can hear the sound i made when Rock Bottom showed up. Even outside of that, I really enjoyed this one. It felt kind of Classic with the various ways Mr Krabs tries to get rid of Squidward. I was worried it would get dark but thankfully it didn't actually have Mr Krabs try to kill him....until the end but both he and Squidward got amusing comeuppance at least. So yeah, a solid surprise.
Click to expand...