If I close the plot: SpongeBob discovers a club of people who hate him, and unfortunately, they hate him enough to try to kill him.

Why does this sound fake?

MightyMario said:
Why does this sound fake?
Click to expand...

The plot is Squidward setting up a club at his house centered around hating SpongeBob.

I wasn't too big on the episode. I liked the use of short stories but Squidward was treated quite unfairly (a problem with some Season 13 episodes in general), and SpongeBob can be annoying depending on your view. Overall, meh. 5.5/10.

Let me start by saying the positives of this episode: Some of the jokes were funny and I liked Plankton’s story. I thought that one was the best of the four (five if you count the mailman at the end) stories.

But holy King Neptune was this episode bad.

I get that they hate SpongeBob. They think he’s annoying and want him to go away. All SpongeBob was doing was trying to be nice and friendly to them. (though I do think in Bubble Bass’ story, his OCD was off the charts).

I guess I should explain what I thought of the stories (minus Plankton and the mailman, because I liked the former’s story and the mailman didn’t really get one).

I do generally like Mrs. Puff. I think the boating school episodes are great and hilarious to watch.

However, I think it was callous to have her portray SpongeBob as a monster. *e.g: In the beginning they have SpongeBob appear in the boat and look horrifying, while saying to the student with the license. “Can I touch it? (it referring to the license.*

I did not like this story overall, even though it got back to normal at the end.

SpongeBob’s OCD got the better of him in this story by having everything be “perfect”. But not letting Bubble Bass eat anything because it wasn’t perfect felt like it was over-exaggerated.

Here’s where the problems I had with this episode came full force.

SpongeBob is just trying to be friendly. He just wants to know what’s going on. But having him try to break into Squidward’s house is totally out of character for him. It was Squidward’s fault for making SpongeBob trip and destroy the air conditioner. And then having him LEAVE when he destroyed ruined the whole episode for me. That is probably the most OoC moment for SpongeBob in the show’s history.

Overall, this episode was awful. I did not enjoy watching it and will be skipping over it the next time I watch The Big Bad Bubble Bass. 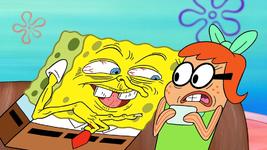 This scene would look very weird out of context. Some of the face expressions in this episode are just... creepy.

That image proves my point of Mrs. Puff making SpongeBob seem like a monster.

Spongebob is (at this point) a creep...

I expected this to be scumbob here

WeirdSponge64 said:
I read the plot...

It personally sounds like a ScumBob episode because Squidward will likely be ragingly unlikable
Click to expand...

But it was actually very mediocre. The plot is trash and the stories (except plankton and bubble bass') are all boring as well as the episode but this one was actually insane if you come to think of it