What was the first avatar you had on SBM?

Mine was one of Cookie Monster from C Is For Cookie from Sesame Street. I've got it on right now in fact :P

my first avatar was just a default one here >.<

A Kairi Icon. I can´t remember which one.

the only good parts of sbm are the skins and tradi

a Halloween avatar with spongebob and patrick

Mine was the "eyelashes" SpongeBob from the episode Dying for Pie.

Mines was a SpongeBob imagination (while standing up)

Mine was Queen Amphitrite from The Clash of Triton

Mine was the straw hat pirates flag

Mine was a default one with Patrick looking through binoculars with realistic eyes, it was from Idiot Box.

. I can see why some people thought that I was a boy during the first few weeks that I was here.

Untalkative Bunny sitting on a couch

It was supposed to be a gif of the baby duck transformation scene from their first appearance in Regular Show...but I didn't realize that the gifs don't work too well as avatars. :P

It was Katniss Everdeen, I believe

I'm currently on my 14th avatar;

1. The cracked smile SpongeBob gives Squidward in Employee of the Month

And in case, here are the other ones (though I won't be sharing the avatars themselves due to it only being fair and that I would probably run out of space anyway);

2. SpongeBob lying down at sunset in Dying For Pie
3. Squidward whistling while about to kick a shell in Reef Blower
4. SpongeBob gets stung while greeting himself to a jellyfish in Nature Pants (something tells me that this should've been my first one)
5. A fan made one about Mr Krabs
6. SpongeBob's body breaks through Sandy's rocket's door in Sandy's Rocket (though it's Patrick's face that sells it to me)
7. SpongeBob and Patrick hang on to the satellite with a radio on top in Sing a Song of Patrick
8. Flying Dutchman in Scaredy Pants
9. SpongeBob realises that the pickles are underneath Bubble Bass's tongue in Pickles
10. SpongeBob wears a beard in front of his stone copies in SpongeHenge
11. SpongeBob getting ready for Christmas in Christmas Who?
12. SpongeBob is blue and is squished inside a tub of paint in House Fancy
13. Ned Flanders making me a weird sign with his fingers (I believe it's to be an OK sign)
(And just in case someone looks at this in the future and I'm on a new avatar)
14. SpongeBob and Patrick walking through Jellyfish Fields in Patrick SmartPants 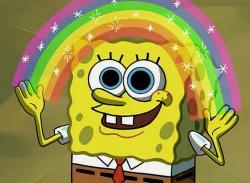 let me show you how its done