So anyway, last time a made a list of ridiculous SB scenes, today, I'm going to make another list in NO APPARENT ORDER about dirty jokes in SpongeBob. Likewise, It's Y7!

SB : "Doubloons (brings some soap) Don't Drop em'" - Gary Takes A Bath-
This joke describes the biggest fear of prisoners in the US. If you drop the soap in the prison shower, you're in the perfect position to be raped! The term is usually used in humor.
BUT IN SB!! OH MY GOD!!! I COULDN'T BELIEVE IT! You expect the kids to stay in front of the ::dolphin noise:: TV, just lying there without undertanding the joke. But what happened if a whole church saw it.

Mr. Krabs : "Ahhhh you got me! Well at least it's underwire." - The Algae's Always Greener -
Refers to the 'underwire' bra, which works like a pushup bra to enlarge and support cleavage. I need 2 years to understand condoms. now this came.

Squidward : : " Don't you mean only 7?"
Mr. Krabs : "Not if you're a sailor ak ak ak ak." - Sailor Mouth -
Refers to 7 bad words you can never say on TV (George Carlin). Okay, I'll be honest. MY GRANDAD was a sailor. and when I asked him about this joke, he said something I'll never ever forget : "What's that you said little Shaqueel?" and I was like :P

Couple : "Thought Bubble" - Rock a bye Bivalve
Do I need to speak about this?

One of the things i like about SB humor is that adult jokes are slipped in to a children's show. :magicwink: kudos to you SB writers!

I especially like #3 and 5. Thought they were really funny!

:krabsx: Oh, you got me! Well, at least it's underwire. rofl!

How about the time when spongebob said to patrick, "Your genius is showing" (::dolphin noise::) and patrick covered his private

There's one in "Squidtastic Voyage". SpongeBob attempts to pull the Clarinet from Squidward's throat, but from the outside, a mother and her child can only hear strange noises, so she covers her child's ears and looks at Squidward's house in disgust.

My favorite subliminal dirty joke was in "Mid-Life Crustacean" when SB, Pat, and Mr. Krabs walk into the laundromat and Krabs says "Any ::dolphin noise:: in this store?" and then realizes its a laundromat. In fact, that whole episode was filled with questionable content, most notably the "panty raid." I'm surprised an episode like "Gary Takes a Bath" was banned in some countries but this wasn't...lol but I love this episode.

Also, in "Fools in April" and the Christmas episode, there are subliminal messages that Squidward is a jack ::dolphin noise::! :xdmagic:

Patrick: If I were a mom, this would be kind of shocking...... Just call me daddy!

Spongebob: "Patrick, your genius is showing!"
Patrick: *covers crotch* "Where?"

SpongeBuddy Sr. said:
What about:

Patrick: If I were a mom, this would be kind of shocking...... Just call me daddy!
Click to expand...

Dont forget about the episode SpongeGuard on Duty! :dts:
Patrick: Being a lifeguard is so dumb. All they do is blow, blow, blow on there stupid whistles, rub, rub, rub that white stuff on their noses, and show off their gross misshapen bodies!
Harold: Dude, put that thing away. There are like, children here.
:naughty: :naughty:

i find it difficult to comprehend that if you never lost your password, you would be called Road. 0_o


i find it difficult to comprehend that if you never lost your password, you would be called Road. 0_o 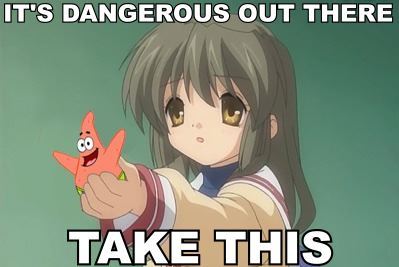 Haha, I was so disturbed when I finally understood that "Don't drop 'em!" joke. It went right over my head when I was little!

What about in Christmas Who?, when they basically call Squidward a, um, "donkey" and they don't even try to be subtle about it? Even as a kid I knew what they meant.

Location
Somewhere out in the galaxy

I don't think that was dirty...it was probably misinterpreted. I think SpongeBob and Sandy's karate spree was alluding to addiction in general instead of pacifically something dirty.

Perverts think it's supposed to parody having the feeling of something related to horns, I personally don't get that at all but okay. :|

Are any of us prisoners? If not, why do we know about #1?

What about in "Naughty Nautical Neighbors" when Patrick carresses Squidward while screaming, "FRIEND...!" after he saved his life. Squidward says, "Yeah, Patrick, we're friends!" The mailman walks down the street and stares at Squidward and Patrick like they're perverts! So Squidward gets all nervous like, "JUST friends!" Even SpongeBob had a funny look on his face.
You must log in or register to reply here.
Share:
Facebook Twitter Reddit Pinterest Tumblr WhatsApp Email Share Link
Top