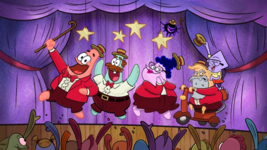 Nickelodeon announced that the two new animated series “The Patrick Star Show” and “Middlemost Post” will debut back-to-back on July 9 at 7 p.m. and 7:30 p.m.

Both series will continue to roll out new episodes on Friday nights.

“The Patrick Star Show” marks the second “SpongeBob SquarePants” spin-off series after “Camp Coral” made its debut on Paramount Plus earlier this year. The series will follow a younger Patrick Star living at home with his family, where he hosts his own variety show for the neighborhood from his television-turned-bedroom.

In the premiere episode, “Late for Breakfast,” Patrick presents a show about food after missing out on a hearty breakfast. Then in “Bummer Jobs,” Patrick and SpongeBob experience the wonders of the workforce.

Marc Ceccarelli, Vincent Waller and Jennie Monica are co-executive producers of the series.


“Middlemost Post,” which marks Nickelodeon’s first original animated series in five years, follows a former rain cloud, a brawny mailman and their magical pet walrus as they deliver packages to the unusual inhabitants of Mount Middlemost.

In the premiere episode, “First Delivery,” the gang goes through warfare while trying to deliver a letter to a house that never gets mail. Then in “Chore or Less,” Parker does the chores in an attempt to be more like Angus and comes to realize that they’re actually boring.

I am really interested in how this will play out. I am quite excited!

i think i saw a sea urchin!

so this creature is Patrick's family pet?

I think so, it appears in both trailers and next to Patrick himself.

I'm worried about how dumb they make Patrick. He's gotten worse through the last 25 seasons of SpongeBob but I just hope he isn't made to be annoyingly stupid.

This show is just Rugrats' "Kid TV" but with SpongeBob characters

EDIT: They confirmed my suspicions about Squidina being the same one from "Goons on the Moon"!
Last edited: Jun 21, 2021

the schedule look messed up, Late for Breakfast/Bummer Jobs episode should be first.

Combusto82 said:
i think i saw a sea urchin!

so this creature is Patrick's family pet?
Click to expand...

Yes, in a SpongeBob Instagram post he is confirmed to be Patrick's pet, and his name is Ouchie.

I'm gonna be watching it on my own tv that still has cable.

The names of the Patrick Star family members have been revealed: