I have to like it. It had been custom built for Plankton's character development. It is a part of the show.

I love the show.

I love every part of the show.

Including it's originally built pairing.

SpongeRoadie UK said:
I have to like it. It had been custom built for Plankton's character development. It is a part of the show.

I love the show.

I love every part of the show.

This is the only ship involving a computer that one could lvoe.

Spandy: I use to be a big Spandy fan when I first found out more about the fandom two years back. It doesn't appeal to me anymore because both characters have clearly been shown to not have any romantic interest in each other besides the rare SB's Survival Guide: How to Survive a Secret Crush. And even then, it's just a ity bity puppy love crush that isn't existing in the show. SpongeBob loves everyone around him equally. So just because Sandy's a girl it means that he automatically is fawning over her because he again, loves everyone? I've looked through all these supposed hints that other shippers point out. For a while I believed them too. But then I got to realize something. If my whole life thought of their relationship as a big sister and little brother and rarely ever thought of them as a couple, why change my views? So yeah that's just my little rant on how my views on the ship have changed.

My opinions on the other ships:

Mindy/Patrick: I'm fifty fifty on this one. Mainly because Patrick has fallen in love with mermaids in the past. Is it just his f̶e̶t̶i̶s̶h̶ love of mermaids in general that's doing the talking? We might never know. Plus it's only a ship if both characters are interested in each other. And it's not because of my crush on Patrick that I semi dislike this ship

Squilvia/Squidward: One time ships really irk me to be honest because they never go anywhere. Every single ship besides Karen/Plankton has been a victim to this. That being said, I guess it's okay. She's like a female version of Squidward.

Krabs/Puff: Pretty cute, it's cool to see SpongeBob's fatherly/motherly figures kinda together for the first time. But this pre movie ship has been done with a long time ago. I am aware that recently there was a Kruff comic strip by Kaz in the SB Comics. But this wasn't apart of the actual show. So Summer Job just seals the deal that their relationship is pretty much history. I still count them as my second favorite ship though.

Karen/Plankton: Yay an actual married couple. These two are the only ship to be together since the beginning. Their relationship is mostly played for comedy or sarcastic purposes. But sometimes they can have those sweet moments like in Single Cell Anniversary. So overall, it's my favorite ship mainly because it's canon.

I ship everyone with everything.
Squidward and his kelp garden? #1 ship 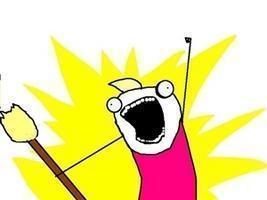