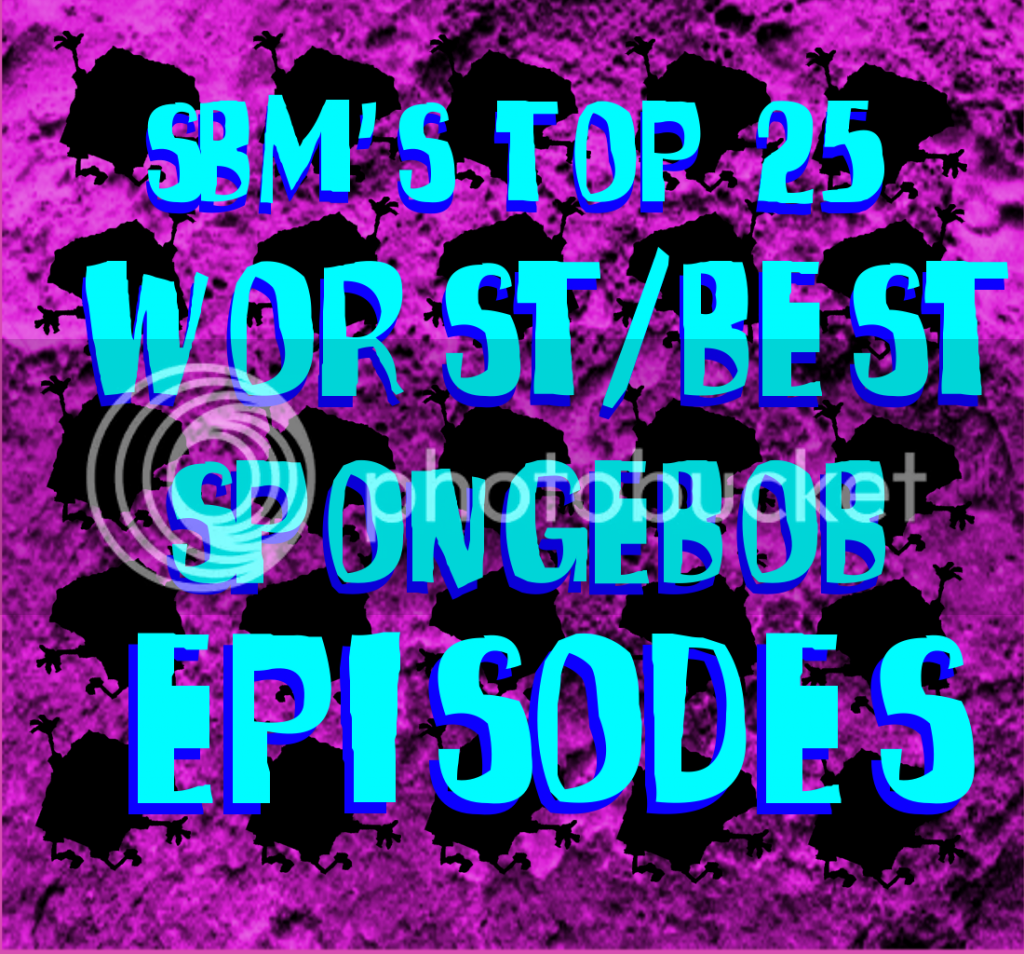 Greetings to SBM users everywhere! A while ago, I had created a Top 20 WORST Spongebob Episodes, as a Fan Voted countdown. But today, I want to do something special by doing another countdown. But rather than a Top 20, I want to do a Top 50! That’s right, I will be composing and reviewing 50 episodes, as voted by the fans. To compose 50 episodes, it’s going to be a half and half countdown. Meaning that this will be a two part countdown, with 25 episodes in each part.

For this countdown, I have decided to compose what fans think are the 25 worst episodes of the series, and the 25 best episodes of the series. Now you might be asking; “Didn’t you already do a fan edition?” Well yes. Yes I did, actually. But to make things special, I’ve decided to do something different. TO help me make this countdown, all you have to do is send me a message, giving me a list of your 25 least favorite episodes, and a list of your 25 favorite episodes. Don’t worry, I promise I won’t tell anyone your top and bottom lists. But there are a few rules to follow, before you message me:

14 A Day Without Tears

9 The Cent of Money

4 Stuck In The Wringer

12 Someone’s In The Kitchen With Sandy

7 Yours, Mine and Mine

6 Stuck In The Wringer

1 Tie between One Coarse Meal and A Pal For Gary

12 The Algae Is Always Greener

11 Fear of A Krabby Patty


2. For my original Fan Edition, you aren’t allowed to pick episodes from that Fan Edition, except for the ones I mark with a red X. The reason I’m doing this part is because when I originally reviewed the episodes that have been marked, I felt like I didn’t say exactly everything that needed to be said about them, so if they appear on one of the parts again, I will have the chance to give them a bigger, longer review.

10 The Clash Of Triton X

4 Tie between Boating Buddies and One Coarse Meal

3. NO SHORTS! Like I said in my “You Request, I Review” topic, Season 5 shorts like Waiting, Pat No Pay (and even Season 1's Reef Blower) are fine, but shorts themselves (like Back To The Past shorts) aren't allowed. One, because if I've never seen a short, if I try to find one, it would be impossible. Two, mainly because they aren't even episodes!

5. This time around, you are actually allowed to vote for the latest special, Spongebob You’re Fired.

6. No movies; The reason I say this is because the movies are released to the theaters, not television, therefor they will not be subject for reviewing. TV movies such as Truth or Square are acceptable, though.

7. You are allowed to vote for the episodes that I’ve reviewed in my “You Request, I Review” topic, as long as they haven’t been reviewed on both my Bottom 20s, my Top 20, and my Fan Edition (except for the ones marked in a red X). Also, episodes from any other of my lists are acceptable.

I'm following it. I can't wait. By the way, I can't PM my bottom 25 and top 25 episodes because I haven't done these lists yet. I still need to watch and rate the episodes that I haven't seen in a while (most of season 1 and 2 episodes and the last season 5 episodes).

I will follow, even though both of my lists can't be revealed.


I will, however, happily reveal my favorite episode is-

Gordok: Come on, I've gotta get his favorite episode. (swipes card down slot)

NOTE: I'VE ALREADY COMPILED THE VOTES! IF ANYBODY WANTS TO SEND ME A VOTE, I SUGGEST THEY DO IT WITHIN THE NEXT TWO DAYS, BECAUSE THE VOTING BOOTH WILL BE CLOSED ON JANUARY 1ST AND THE COUNTDOWN WILL BEGIN. THANK YOU.

NOTE: I HAVE FULLY COMPILED THE VOTES FOR THE WORST/BEST LIST, SO THE VOTING BOOTH IS NOW CLOSED. THE COUNTDOWN WILL BEGIN TOMORROW ON THE FIRST DAY OF 2014. MERRY CHRISTMAS AND HAPPY NEW YEAR!

Happy New Year, Gordok and I can't wait for the countdown.

AAAANNDD its not here yet

SquidBox said:
AAAANNDD its not here yet
Click to expand...