The Haunted Mattress said:
57 is the Curse of the Hex.
Click to expand... 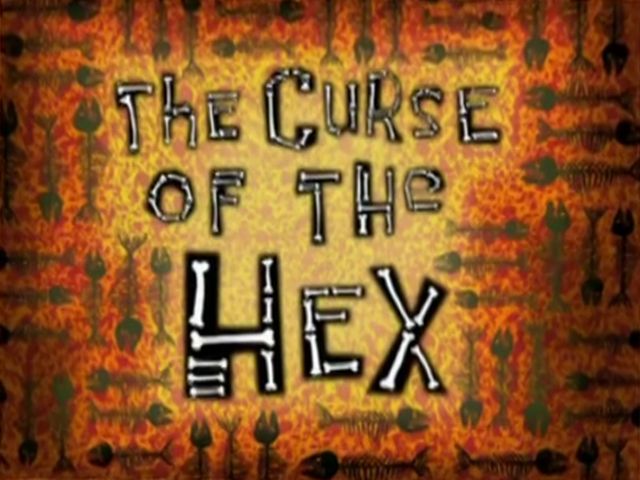 In the middle of season 7, they released this thing called the Legends of Bikini Bottom. It comprised of 6 episodes:
The Monster Who Came to Bikini Bottom
Welcome to the Bikini Bottom Triangle
The Curse of the Hex
The Main Drain
Trench-Billies
Sponge-Cano!

Anyway, in this one, Spongebob is ready for closing time, when Madame Hagfish (we never heard on her, have we) comes in the Krusty Krab and asks for a Krabby Patty. It's closing time, so Sb sneaks her one, when Mr. Krabs gets angry, so Madame Hagfish puts a curse on the KK. A bunch of stuff happens, so Mr. K and SB go to Madame Hagfish, where she tells them to go to the Golden Eel. They get the thing (I don't remember because I haven't seen the episode in a while.), and Madame Hagfish reveals her curse was "CLOSED" sign.

Well I am started to like The Curse of the Hex I don't see why people hate Madame Hagfish they should hate Mr. Krabs

I hate this episode! 56 is on the tip of my tongue.

Yes, this little monster.
In this episode, Spongebob is working, when he hears about the Krabby Patty secret ingrediant being stolen. He wonders where it is, when Mr. Krabs tells him to blame people. He blames Plankton, Gary, Sandy, Squidward...

It turns out it's Mr. Krabs.

This episode, deaugh. 55 is Smoothe Jazz.

I love Patty Caper but still, great list so far

I actually originally had the plot filled out, but I accidentally backspaced and erased my data, so I'll just leave this here:

All Pearl does is whine and complain. She throws a slumber party, ruins Mr. Krabs house,

Least favorite character- Pearl
Least favorite moment- The beginning and the end
Least favorite quote- Pearl whining and complaining (shut up before I skin you, kill you, and eat you for dinner you stupid whale)

New #60? Ok, why not Slumber Party was a great episode for me, even though I started off hating it at first. I then realized the beauty in it ;]

I did it because I don't think HF is worthy of the Hall Of Shame Of Bad Spongebob Episodes.

WHAT? I love Patty Caper episode. It's one of my favorite season 6 episodes. Also The Slumber Party wasn't bad either. The Curse of Hex is so underrated and It's my second favorite LOBB episode.

In this episode, Squidward listens to Kelpy Gee, then hears about a concert, so he tries to win tickets. He fails, but Spongebob wins. Spongebob then takes Squidward. Squidward is at first happy, then gets annoyed by SB. Same with the other squids there. Patrick comes and eats the freaking backstage passes (Screw you, Patrick!) and then Squidward and Spongebob get thrown out because some stupid idiot thought it would be funny to steal their seats (Screw you, giant squid). Squidward and Spongebob sneak in and play music, and SB gets the glory while Squidward gets taken away. (Screw you, security guards)

Least favorite character: Spongebob
Least favorite moment: The moments that made me say "screw you"
Least favorite quote: What the giant Squid said (I don't remember because I haven't seen the episode in a while.)

Squidward did not need this.

I thought Smoothe Jazz in Bikini Bottom was very hilarious but I can understand why you put it on your list. It's one of those episodes that I can let Squid abuse slide.

I like #56, #55 and the new #60. Considering that I put lower standards for season 6 episodes, Patty Caper is actually quite good. Nice story, some pretty humourous bits, etc. The Slumber Party is another episode that has a good story and even MORE humour. SJiBB is also a rather enjoyable episode. So really, I don't get your placements but I do respect them. So don't be encourage to change your list.

StormTheBunnyBryat said:
I don't see why you hate Patty Caper it is a great episode but it is not as good as The Great Patty Caper
Click to expand...