The SpongeBob Film: Sponge On The Run Is Still Heading To Theaters, But Not How You’d Think - TheNewsTrace

Feedback × Depart a Remark Share × Fb Copy to clipboard information The SpongeBob Film: Sponge On The Run Is Still Heading To Theaters, But Not How You’d Think Adam Holmes Jul. 31. 2020 12:37 PM Extra from Adam Holmes Dave Bautista Says He Tried To Play DC’s Bane, But How? Fb # Copy to […]
thenewstrace.com

Whereas quite a lot of motion pictures, each accomplished and within the midst of being made, have been delayed by the present well being disaster, a handful of flicks that have been able to hit theaters this yr have as a substitute turn out to be VOD or streaming choices as a substitute. The Spongebob Film: Sponge on the Run appeared to be taking that method, however now it’s been revealed that it’s going to play in theaters in spite of everything… form of.
Just a little over a month in the past, it was reported that The Spongebob Film: Sponge on the Run was scrapping its theatrical launch in favor of heading to VOD in early 2021, after which making CBS All Entry its unique streaming residence in some unspecified time in the future after. Nevertheless, the Paramount Footage Canada Twitter web page revealed that Sponge on the Run will play in Canadian theaters beginning August 14. Folks in the USA, nonetheless, will nonetheless have to attend for the threequel to hit VOD subsequent yr to be able to watch it.

Many film theaters, together with main chains like AMC Theatres and Regal Cinemas, wish to reopen quickly, however the truth of the matter is that the pandemic continues to be raging sturdy, significantly in the USA. As such, there’s been discuss recently about theatrically releasing motion pictures in different territories within the close to future first, and dropping them within the U.S. at a later date. That is what’s taking place with Tenet, with Christoper Nolan’s newest flick debuting in 70 worldwide nations on August 26, adopted by a restricted U.S. theatrical launch on September 3.

Within the case of The Spongebob Film: Sponge on the Run, it’s unclear if Paramount continues to be considering releasing it in U.S. theaters later this yr, however regardless, in case you dwell in Canada, you’ll be capable to watch in a standard theatrical setting in a number of weeks. The U.S. and Canada are historically grouped collectively in a single market, so for the studio to separate its Sponge on the Run plans for each nations is a daring transfer.

The Spongebob Film: Sponge on the Run has bounced round rather a lot on the calendar through the years, with the plan earlier than the pandemic wreaked havoc on on a regular basis life being to launch the film on Might 22. It was later shifted to July 31 after which August 7, and by early June, the VOD/CBS All Entry information was introduced. Earlier this month, Netflix acquired the worldwide distribution rights for Sponge on the Run, excluding the U.S., Canada and China.
Click to expand...

Canada has their **** together. So they get to watch movies in theaters.

I'm embarrassed for my country. Especially because most folks are trying to do right here- you've just got a small but influential bunch of blockheads who have to spoil it for everyone else. /soapbox

Looking forward to the film, still!

The worst part of all this is the fact that SpongeBob SquarePants is an American cartoon yet we're being shafted! 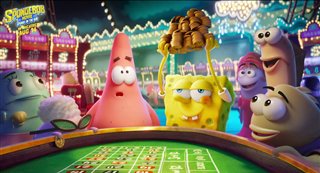 THE SPONGEBOB MOVIE: SPONGE ON THE RUN - Canadian Trailer | Movie Trailers and Videos

Watch the THE SPONGEBOB MOVIE: SPONGE ON THE RUN - Canadian Trailer. SpongeBob SquarePants (Tom Kenny) announces he loves his life, and he loves his snail,...