A Day With SpongeBob SquarePants: The Movie

A Day With Spongebob Squarepants: The Movie is a Direct-To-DVD movie by Video Music, Inc. and released by Inovisim Films on November 22, 2011. The movie is a "unauthorized mockumentary" and was not made by Nickelodeon. The DVD had a very limited release and seems to be out of print, Copies of the DVD haven't seem to resurfaced since the release date. Little information is available about this movie, other than the DVD cover and a plot summary and length (70 minutes, although this couldn't be the real length due to the distributor, Reagal Films, saying their films are 70 minutes but they aren't). No screenshots or trailers are available on the web.
Click to expand...

"In this mockumentary, SpongeBob lives above ground like all Hollywood superstars. Afraid that SpongeBob is becoming old news, his boss runs a contest called "Spend a Day with SpongeBob." The contest makes SpongeBob the talk of the town and thousands of kids enter to win. The lucky winner is a boy named Seth, and he is ecstatic about his day with SpongeBob. However the day becomes a rollercoaster ride as things don't go quite the way they planned."
Click to expand...

So what are your thoughts on this INCREDIBLY rare piece of SpongeBob media? Personally, I've just been dying to see it, even if it's really awful. Why nobody has posted any footage online? Who even owns these? It's certainly one of the biggest SpongeBob-related mysteries known to date.

I remember seeing this on the SB Wiki and I was like WTF is this ::dolphin noise::e.

I'm glad it was lost. Nobody wants to see this garbage.

I'm surprised no one made the most obvious theory about this film. It's an unauthorised use of an immensely popular cartoon character owned by a highly litigious entertainment company. If this film did exist on any level, even an announcement, I'm sure Viacom would have swooped up and buried them in legal paperwork and court summons preventing the film from being released.
Click to expand...

By a Wiki Contributor

I wonder how they animated it. CG animation or 2D animation but in realistic locations? Will we ever know?

Hey! One of the comments lead to our forums!

But seriously. Read the comments on the wiki page. They are much more informative than the actual page itself.

There is no way, not ever, this could be real. Plus, you said you found this on a wiki, which wikis are unrealiable sources because anyone can edit them.

Found out that the kid in the dvd cover is actually a stock picture.

There is no way, not ever, this could be real. Plus, you said you found this on a wiki, which wikis are unrealiable sources because anyone can edit them.

Found out that the kid in the dvd cover is actually a stock picture.
Click to expand...

Yes, you're correct. If you do a reverse image search for the boy jumping, you can see it's a stock picture.


http://www.google.com/imgres?imgrefurl=http://www.dreamstime.com/stock-images-excited-little-boy-jumping-mid-air-white-image19899374&tbnid=F3z3empR2z9QaM:&docid=ASkPFuD3qvJFOM&h=443&w=4007
Plus, one of the reasons you can't find this film anywhere is because the company, Inovism Films, says that every film they make is 70 minutes long, which isn't actually true. You can find the film on Amazon, but there are none in stock, but there is also a guy who reviewed the film. If we could only contact him, he might know something.

One of the people on the Lost Media Wiki said that he did a Wayback Machine search to the Amazon Link, and he said it was able to be pre-ordered, but then a day after, it was out of stock...like wtf? Then, a month later it's still out of stock, andddd then still today it's out of stock. Also, whoever wants to see if they can buy this DVD, http://dvdworldusa.com/shopexd.asp?id=82408. Contact them.

Anyways, very interesting how this hasn't been found yet. Someone also found the address for the company group (Relentless Media).

I already heard this somewhere.

That's what I was about to say, I was pretty sure it had to be real because it had an Amazon page. Also, one person in the comments mentioned that they had ordered it off of Amazon but it never came due to the item being cancelled or something.

Yep, knew this would probably be fake when I saw it was on a wiki. I thought it was just too weird that they used people in place of the characters...among other things.

I just noticed the "reviews" up at the top. I can barely make them out at that size, but one of them says "Fantastic, a total crowd pleaser." There is absolutely no way anyone on the world would ever say that about an unauthorized mockumentary. This is fake.

Hey, someone actually found a screenshot of this thing! 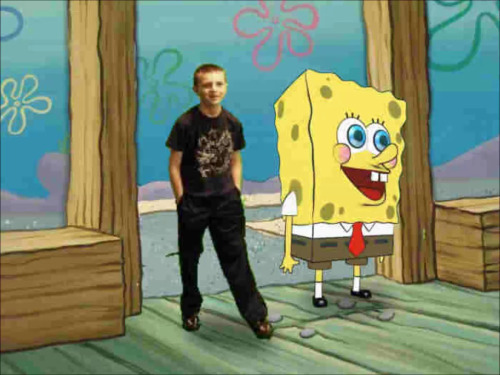 HOLY CRAP! That's HUGE news! Now we know it exists! How did they find that screenshot?

I wonder if anyone has this DVD. Such a mystery, right?

Ling-Ling said:
Hey, someone actually found a screenshot of this thing!

In a precious reply of mine, I said to burn this mockumentary. Now, I really mean it. BURN IT!!!

That screenshot just wants to make me see it even more. I don't care how awful it is. I NEED to see the rarest piece of SpongeBob-related media.

AnimationCreated said:
In a precious reply of mine, I said to burn this mockumentary. Now, I really mean it. BURN IT!!!
Click to expand...

You're right. It does look creepy. Should have put less "happy detail" into this, right?

I'm thinking that somebody should go out and reach to the producers of this film for more info. Would be a good idea.

Also, weird idea alert, but could this eventually be split into a couple of episodes and actually aired on Nick (or aired as a TV special/movie), in the vein of Family Guy's "Stewie B. Goode"/"Bango Was His Name-Oh"/"Stu and Stewie's Excellent Adventure" based on the Stewie Griffin: The Untold Story direct-to-DVD, movie or Wow! Wow! Wubbzy!'s (had to mention that show, sorry) Wubb Idol episodes. Would give some good episode mileage/a premiere week, even if it becomes another big block of "Atrocity" episodes on Mr. Enter's scorecard. Just a fun idea... :P

I'm almost certain this doesn't actually exist, or if it does it wasn't made as an official DVD release and just as a low budget project.
Here's an in-depth review of evidence I found on another forum:

In this video at 15:23, it talks about a supposed lost film called A Day With Spongebob SquarePants: The Movie. The film is said to be a direct-to-DVD film with very few copies in existence. No footage, trailer, or screen shots of the film exist. The movie does have an Amazon page and one person reviewing say it was great. There is no IMDB page of it though, and nothing else is known about the movie. It was supposed to be a film about a kid meeting SpongeBob and was supposed to have a good time but something went terribly wrong. The only artifact regarding the apparent film is a poster showing a boy jumping in front of a drawing resembling Bikini Bottom. The poster says it's produced by Inovisim Films, and has no association with Nickelodeon.
poster: http://vignette2.wikia.nocookie.net/lostmedia/images/7/7b/ADayWithSpongeBobSquarePantsTheMovie_HQCover.jpg/revision/latest?cb=20140704093021
Reasons why it may be fake:
-No such company called Inovisim Films exists. Google it and it just shows small tidbits of info about the movie, and message boards taking about said movie and trying to examine the evidence to determine whether or not it exists.
The boy shown jumping is part of stock footage. Google "jumping boy" and you will find him in the image section.
-All of the reviews on top of the poster are fake, or seem fake. Google them and you will find no information about them other than leading to the SpongeBob film. While there is a Look magazine, the other two show nothing, and no person with the name Tracy Levitz shows no results on Google to be connected with film reviewing.
-If the film was real, Nickelodeon would have dropped a heavy lawsuit on Inovisim.
-No footage or screenshots exist. No IMDB page, which are just the final touches to prove that no such film exists.
If it does exist, the only chance it is real is that there is a very amateur film similar to what the plot is about and the poster was made for fun. However said film was never released to public. This still wouldn't be considered a real film to the standard of what the story is, but it is the closest thing.
My verdict: fake.
Click to expand...

source
Even though someone found that screenshot, there is no info connected to it. It could have just been made in ten minutes by someone and not have anything to do with the real movie. I feel like if this was actually made it was just a student project or for an art school or something.
You must log in or register to reply here.
Share:
Facebook Twitter Reddit Pinterest Tumblr WhatsApp Email Link