I enjoyed it. Glad to see Ol' Reliable again.

Favorite parts:
* SpongeBob jellyfishing while Patrick kept getting stun
* SpongeBob (then Mr. Krabs) on the news'
* Confess-a-Bear
* SpongeBob in a mustache
* The ending

Okay, if you compare it with the rest of the late Season 4 episodes, it really does take the cake. 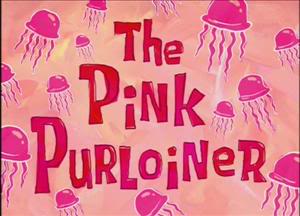 = The Pink Purloiner - ★★★ =
I will say that this is probably one of the most forgettable episodes of all time, so I wasn't surprised that when I was going through the topic to find this episode and review it,
I was very unsurprised to see this at the end of the board. I actually say that it's a bit of a shame, too, since watching it again, I'd say it is one of the better Season 4 episodes
especially when compared to terrible crap like The Best Day Ever and Good Neighbors.

The main plot of the episode is essentially this - SpongeBob and Patrick visit Jellyfish Fields during it's annual jellyfish migration. SpongeBob catches a lot with his net (Ol' Reliable) while Patrick
catches none. SpongeBob boasts about his net's superiority and when his net goes missing, SpongeBob accuses Patrick of stealing it. The ending was predictable, but it was a nice, basic plot.
I loved seeing a Season 4 episode take place somewhere OTHER than the Krusty Krab/Chum Bucket/Conch Street.

As for comedy, this episode was full of it. Patrick's "to-do list" got a chuckle out of me, and I actually laughed during the "Confess-A-Bear" gag. In fact, the episode had me chuckling almost
the entire way through and I'd actually come close to saying that this is one of the best "post-movie era" episodes I've ever watched. It's pure simplicity and comedic nature is pretty great.
(That, and "Something small, like a carrot.)

If I have any cons here, as usual, the ending was quite predictable. The episode, as a whole, was actually very forgettable as well.
Not much else comes to mind, actually. I might be praising this episode a little too much, but other than the predictable plot, I actually really liked it.

This is a genuinely good episode from the ending part of the fourth season. SpongeBob and Patrick were both hilarious, especially Patrick. Confess-a-bear, Patrick's to-do list, and the bus driver at the end were all great. Also, the ending was sweet and sentimental. There were a few cons here and there, like SpongeBob being overly anxious about his missing net, but I think it's safe to say that this is a pretty good episode from season 4. 8.2/10

Ugly Barnacle said:
This is a genuinely good episode from the ending part of the fourth season. SpongeBob and Patrick were both hilarious, especially Patrick. Confess-a-bear, Patrick's to-do list, and the bus driver at the end were all great. Also, the ending was sweet and sentimental. There were a few cons here and there, like SpongeBob being overly anxious about his missing net, but I think it's safe to say that this is a pretty good episode from season 4. 8.2/10

I like this episode but I always seem to forget about it. =/ Otherwise its a 9/10 for me because after a while it can get annoying.

This is a very underrated episode. Confess-A-Bear was awesome, with a great plot and really funny jokes.

SpongeBob was acting like a jerk to Patrick but it was nice they made up and all, it had a good plot and some humor. 7/10

This episode is good, but there isn't much that stands out about it. It's just plain old good.

This episode is just perfect. It's not just one of the best episodes of season 4, It's also one of my favorite post-movie episodes. All of jokes in this episode was very funny, this episode was enjoyable and the ending was a little touching in my opinion. Also It's good to see a Jellyfishing episode in the post-movie era. Many parts made me laugh like Patrick's "To Do List", the part with Patrick and Confess-a-Bear, Mr. Krabs' cameo and Patrick growing another arm. 10/10

I loved this one. Very funny throughout and not a minute wasted. Lots of great jokes. Highly underrated episode. 10/10

So funny and creative! From the new jellyfish to Confess-A-Bear, it had little to no flaws. 9/5/10 :)

This episode actually made me tear up a bit towards the end. 10/10. Probably the second best of season 4.

I enjoyed this one. I like the episodes where Spongebob displays a character flaw without being cruel (just being a person,) but is likable and empathetic at the same time. This is one of those warm fuzzy episodes. :3

Another favorite from this season.

I used to hate this episode, but I'm now starting to warm up to it. I used to find it really annoying with SpongeBob's yelling and didn't find it very funny, but now I actually do think this episode is funny. It has so many good jokes that I can't believe that I hated this episode at one point. It's a really well-written episode and Spongebob really isn't as annoying as I once thought as him thinking Patrick stole his net is believable. I still think him going all crazy when Patrick says he's acting weird by being all like "I'm not acting weird, you're acting weird!!!", but Patrick just shrugging it off was funny. It still has it's problems like I still think SpongeBob and Patrick can be a little annoying at times and I thought the ending was kind of sweet, but also a little sappy at the same time although the angry bus driver makes up for it. It's not a great episode, but it's a very solid episode and it's not as bad as I made it out to be.
You must log in or register to reply here.
Share:
Facebook Twitter Reddit Pinterest Tumblr WhatsApp Email Share Link
Top