This is probably my favorite Mermaidman and Barnacleboy episode.. The scene with Patrick using Squidward as an action figure is hilarious. "..AND HERE COMES THE GIANT FIST!!"
The pickle part is so funny

and we can't forget about Wumbo.... wumbology..the study of wumbo

Is this the one where they just fade out when Patrick's speaking and Squidward just goes...

One of my favourite episodes from Season 3.

It's weird, but also really funny at the same time, I loved the "Get SpongeBob" scene!

I didn't like this episode that much. One of my least favorites for MM/BB and Season 3. Funny parts are SpongeBob using the shrink ray, wumbo part, Patrick playing with Squidward, and Plankton's cameo at the end. 5/10

I don't really enjoy this episode. It had some good things, though, like wumbology, and SpongeBob making Squidward have a million eyes. Otherwise, this episode is not that good. 4/10

This was a great episode of MM and BB second best of those.

Not as good as the third but better than the first and second. :)

This is actually a pretty underrated episode. Wumbo is classic, and I don't see what's so bad about it.

This episode brings to you... THE SUGGESTIVE PICKLE 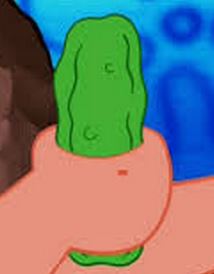 Ehh, there are a few funny bits, but I find it pretty bland overall. The ending is hilarious, though, one of the best endings of the show.

Oh god, i remember first watching this when I was like 5-6, and i kinda freaked out at the bit where everyone starts climbing up SB because i thought it was "too scary", and so i turned the TV off :P

Of course, I eventually saw the whole rest of the scene once i got a bit older...

Good episode, but pretty underrated. Wumbology was the best part, but I don't like the Bikini Bottomies tried to kill SpongeBob.
I don't know how Mermaidman's belt was lost and SpongeBob found it. Also, I don't know why Plankton was the only character not to be small. I wonder where was he. 8/10.

I've always loved this episode and watching it again, it's even funnier than I remember. The Wumbo part is classic and the effect of SpongeBob literally pushing himself into the wall at the beginning after Mermaid Man and Barnacle Boy leave to find the Invisible Boat Mobile was pretty cool. Also, Squidward got some very funny, clever lines in. 8.5/10

I wonder if they had to shrink the rest of the universe and the Plankton being a giant was funny. Wumbology forces me to give this episode a 9/10.

It is a classic of wumbo proportions.