Love the song in this, especially Mr. Krab's high pitched singing at the end lol

Not my favorite, because I've seen it a lot of times, but still a very good episode. Some parts were funny, and some weren't just my type of humor. I liked the part where Patrick went "JUST LIKE A GENIE HAHA". Overall, 7.5/10

It was good, but Sandy just kind of disappears after the beginning. She could've helped make SpongeBob feel better after...*sniff*...SANTA CAME!!! *crys* Also, Potty is way different. He sounds more like an average parrot, and there are constant puppet jokes. It was funny at first, but it just got really over done. Overall, a solid 7/10.

I always watch this around Christmas... such a good Squidward episode.. always puts me in a good mood
The song is awesome... especially Mr. Krabs
The ending with Santa is awesome

This is my favorite SB episode. It's always been with me ever since I was little. I still remember the song lyrics by heart and everytime I watch this episode during the holidays, I feel the spirit and sing the song. The ending with a real life Santa cracks me up everytime. :D

My favorite holiday special. How SpongeBob is all jolly and how stupid Patrick is is just wonderful! The way they just want Chirstmas to come to Bikini Bottom. I love seeing Squidward being the party Pooper. I loved his mistletoe line in the song! Did anyone else notice that the Fruit Cake hatred was brought back in "It's a SpongeBob Christmas!"? :D

I feel as if I am the only one who liked the other winter episode better (Snowball Effect) and I haven't watched It's a SpongeBob Christmas. This episode was funny though and high pitched Krabs FTW

This is the best TV special of the show. There's a great plot, with hilarious jokes. My favorite parts are:

I love this episode, it's my favorite special, as well as one of my favorite episodes, and even one of my favorite holiday specials period. Yeah, I love it that much. The jokes are hilarious. The characters and the plot are great. The ending is extremely heart-warming and a great moment for Squidward. I always love it when Squidward shows that he does have a heart and is capable of kindness, and I'd say that the end of this episode is the most definitive example of that. It always leaves me feeling good.

One of my favorite episodes.

This considers to be one of my favorite episodes. I liked how Squidward cared for SpongeBob and SpongeBob gave him a present. That was the best moment in the episode. 10/10 :D

I love this episode! :D It has a lot of touching moments between SpongeBob and Squidward, and a lot of great jokes! :D Like the high-pitched Mr. Krabs, another piece of paper, the mistletoe scene.... etc :D

And this picture, look at how happy Squidward made SpongeBob :) 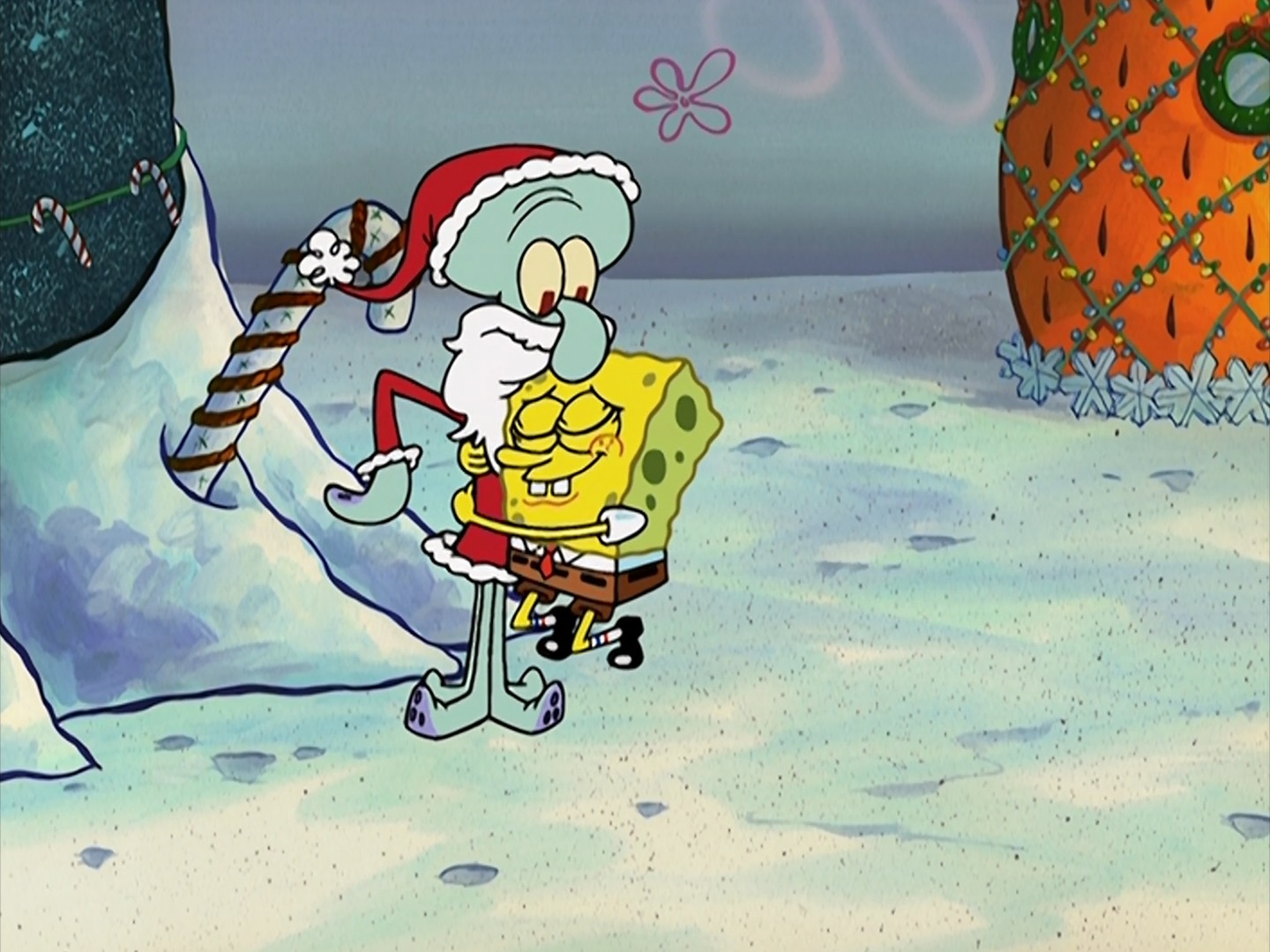 SBRoxMan said:
I love this episode! :D It has a lot of touching moments between SpongeBob and Squidward, and a lot of great jokes! :D Like the high-pitched Mr. Krabs, another piece of paper, the mistletoe scene.... etc :D

And this picture, look at how happy Squidward made SpongeBob :)

That picture is so adorable! <3

In my opinion this is one if not the most touching episode of all time. Let's see what I can recall from memory. Patchy starts the episode with his first appearance ever. It's a little long at the beginning, but not bad. I really liked the music in this one. It's cool to hear a Hawaiian jingle bells. We also get to see Bikini Bottom under snow, which was very rare during the time CW? came out. The story was very original. I'm glad they didn't go with the ordinary Xmas shtick. The songs are still memorable to this day of course. Now let's talk about the best moment of the episode. Actually it's one of the best parts of the whole series.The Squidward and SpongeBob relationship was absolutely spot on and brilliant. How? It followed exactly how they should act. SpongeBob tries to get Squidward to join into something fun, Squidward finds it annoying but doesn't realize how great the jolly spirit of the season is. I could go on forever about this part, but I decided just to sum it up.

SpongeBob doesn't drag Squidward into it besides decorating his home. And that's what I really like about this. Squidward got his laugh when it seemed like Santa was fake like he told them. So what's next? SpongeBob gives him a gift and Squid's heart melts a little. Squidward realizes he's made a *ahem* donkey out of himself and what does he do? He just doesn't try to reassure SpongeBob and be kind. He goes out of his way to pretend to be Santa just to make the little square dude AND the rest of Bikini Bottom happy. He even gives away all his stuff for corn's sake. I can't describe how choked up I feel whenever I catch this special on. It has a beautiful mix of silliness, charm and some serious moments. It captures the holiday spirit beautifully. Would I say it's better than It's a SB Christmas? Well Christmas Who really got passion and definitely has Squidward's most sincere gesture in it. I think both specials are good in their own ways. CW just has more heart when it comes to emotions. While IASBC is more played up for the laughs and schemes. Both are some of the finest work of the show.

I adore this episode too. It's my favorite SpongeBob special and one of the best Christmas specials, I've ever seen. It wasn't just funny, It was also heartwarming (season 2 has some hearwarming episodes like this). Even though, Squidward can't stand SpongeBob, this episode shows that Squidward loves SpongeBob and It shows that he has a heart. It was so heartwarming that Squidward dressed up like Santa to make SpongeBob happy. HANDS DOWN, Squidward is the best Santa ever. Patchy's segment in this episode was great too and in my opinion, that's Patchy's best segment ever. The humor in this episode was great. Patrick's "Just like a genie" line was very funny. It was hilarious that Patrick kept ripping papers. Mr. Krabs singing like a girl funny. Squidward taking SpongeBob's picture when he was sad was funny. Squidward saying "I feel like a..." and then the picture of doneky showing cracked me up. Squidward giving his suffs to Bikini Bottomies as present was funny too. I recommend this special. This special is an excellent Christmas special and one of the best season 2 episodes. I rate this episode 10/10.

I think this is a good Christmas Special. I thought it was funny when Potty ate all of Patchy's cookie dough, became fat, and his body fell off his head. LOL! :) I also liked how SpongeBob spreaded Christmas to Bikinni Bottom. That was sweet.

I felt bad for SpongeBob when he cried and it pulled my heart.

It was funny when Squidward said, "I feel like a-" and then there was a donkey. Agian, LOL! :)

I also liked the part when Squidward was pretending to be Santa and SpongeBob was like, "Sss Sss Santa!"

It was also funny when Potty tried to kiss Patchy in the end.

I really like this episode because Christmas is my second favorite holiday ( Halloween is first ) and because of the song. Its one of the best songs in SpongeBob history. :thumb1:

Fantastic episode with lots of character development with Squidward. It has a lot of warmth and heart but plenty of humor to go with it. One of the best SpongeBob specials ever made.

Personally, it's not my favorite episode, but I do think it deserves to be the fans favorite. It's heartwarming, full of great quotes and jokes, and it's adorable and amazing overall.

Besides, I don't really like most of Spongebob's specials (Truth or Square is a 'good' example), and it's nice to see a special which is actually.. Special.