This episode airs on November 8. Discuss when it airs.


The premise of SpongeBob befriending a giant hamster seems weird, especially when Sandy is with same size as fish but okay. This can end up being pretty funny or pretty annoying. I'm interested for sure.

I..... don't even know what to think of this episode. That almost felt like I ironically hallucinated the episode.... lol.

It's not Amazing, it's not Terrible, and it's not Atrocious..... and it could be just about any other ranking lol.

what did i just watch?

I have a feeling this is going to be... an episode.

UMMMM..... This was an interesting episode. It isn't bad, far from it, but I think that the zaniness of the episode is a bit much. Also, not much actually happens, but there are things to like, and this is miles ahead of Choir Boys and other episodes, so I'll give it a 5/10, Not bad, but isn't the best of Season 11.

Actually, I changed my mind, this episode actually grew on me as I watched, so maybe, a 6.3/10 is accurate.

Greek Chorus said:
I have a feeling this is going to be... an episode.
Click to expand...

It's more of a hallucination than an episode

I haven't seen Cuddle E Hugs, but I've read the comments in this topic and now I feel like I'm going to hate this episode.

While the episode started off kind of weak, I honestly thought the episode got really funny later on. It's a weird episode for sure, and it's hard for me to exactly put my finger on what I liked about it, but I did enjoy the episode.

Location
In the land of awesome cartoons.

I haven't seen any of the episodes of the week because I'm busy, but this looks like the lowest rated one, while my hopes are out for the ones I haven't seen, as well as the upcoming ones, "ScavengerPants" and "Squid Noir".

the animation was really good
.....that's the only defining statement I can give on it at all, I don't know what to make of this episode

Honestly this episode was fine. Not super funny but I was invested enough to find it entertaining. It was actually kind of creepy at some points. Quality wise I'd say it was average.

I really liked the episode especially when Squidward saw people jumping into piles. 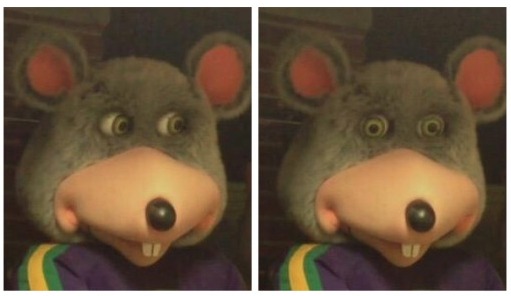 At least that's the vague message I'm getting from how the plot is presented. Cuddle E. Hugs is one of the stranger episodes from recent time. Is it as strange as Feral Friends? Not sure, but it definitely give Feral Friends a run for it's money. Cuddle E. Hugs is one of the strangest episodes in this series. They've had a lot of wacked out episodes, but a lot of them tend to be some sort of fantasy or dream (Like Squidward in Clarinetland, Sleepy Time, inSPONGEiac, etc.). This episode is pretty much just a hallucination manipulating our main characters. However, the ending of the episode is super confusing when it comes to determining how real Cuddle really is.

So let's jump right into the plot. It's a fairly original plot, the whole "Moldy Krabby Patty" object has been used back in Born Again Krabs, yet odd side effects from eating the Patty is an entirely new element, as the Moldy Krabby Patty simply poisoned Krabs in that episode. I'll give it credit, it is a fairly new idea. Now, how exactly was the plot executed? Well...it was executed in a pretty odd manner. The vibe in this episode feels slightly off compared to regular SpongeBob episodes. That does further establish the surreal nature of the hallucination quite well, yet I'm not sure if it's the most entertaining route...

A lot of the scenes with Cuddle feel pretty off, there's something about the music selection used for this scene that gives me this odd vibe that makes the episode come across as a surreal experience. Heck, it's hard to believe an episode with a plot this absurd was even conceived!

I'm not sure if this episode was going in the direction of representing drug use or not, but I must say they really played off the idea of it being like a drugged up experience (On a level appropriate for kids cartoons). This episode seems to balance out the good nature side of Cuddle, and the sadistic, twisted side of Cuddle. His scenes in which he's all happy and whatnot feel very reminiscent of some show for little kids. However, the scene where he's insane feels like something from Regular Show. It's really hard to describe my overall feelings for this plot. I do think the writers did a good job representing a surreal experience involving a character that definitely wouldn't fit in with the show, but at the same time, I feel as if they go a little too far with making Cuddle cute and friendly. I mean, the montage scene is quite uncomfortable, yet fish reacting in a similar fashion to me at the sight of the event kind of made up for it. I guess it's kind of a good thing Cuddle was made super cute, because it makes the scene where he goes insane all the more surprising. There are plenty of things to critique in this episode, but I feel as though bits and pieces of small details covered up a majority of this episode's plot holes. So...is it executed well? Yeah...in a sense I think Ben tackled this premise quite well, and did a good job presenting this odd and somewhat complex storyline. However, I don't feel as though it's quite entertaining. While yes, analyzing it, I can see that the story was presented without any major flaws, yet I didn't really find the plot to be all that enjoyable. Cuddle is such an uncomfortable character to watch for me, I don't like him that much. His voice actor does a fantastic job delivering the lines, and I did kind of find him funny when his cute act was dropped. Unfortunately, I think Cuddle is just too much of a sweet character to handle, there are ways of making a character that seems super nice and friendly funny. Poke fun at the fact that he's so joyous, make some self-aware jokes. A lot of his scenes just come across as either boring or uncomfortable to me, he's not a funny character. In fact, visual gags centering around his fur are funnier than him, and there are very few of these I like out of the loads of fur jokes.

Though I didn't really like a lot of the serious moments (Especially since I could see the twist miles away), I think this episode was pretty funny. There were a lot of jokes in this episode I liked, probably the funniest one being Squidward walking in on the chaotic Krusty Krab. Though there were some dry parts, there were definitely quite a handful of moments that I found pretty funny. Lots of amusing visuals, too, especially when Cuddle eats everyone at the Krusty Krab. Overall, a lot of the jokes did fairly well in this episode.

As for the characters, I think they were a little bit on edge. Granted, there are times where it can be acceptable that they're angry, particularly once their hallucination of Cuddle ends, however, I think Patrick's tantrum was pushed a little too far. Luckily, the episode bounced back with it's sense of humor, and Patrick's boxing scene was hilarious. I think it's almost as funny as the fighting scene from No Weenies Allowed. Is it as good as it? No, it won't remain as iconic and memorable as that scene, but I think this joke was super funny, especially since it's revealed he's steps away from Cuddle. That being said, aside from some slightly crabby fish, I think a lot the characters (Aside from Cuddle) were well written. Not really any character breaks, they all seemed to be written in character.

Overall, I give this episode a 7.3/10. It's a Good Episode. The story, as I said, was executed quite well, yet it wasn't the most entertaining story I've watched. The jokes were mostly funny, and I liked a majority of the characters. Probably the weakest part aside from the montage has to be that ending, it wasn't really that funny, more or less a lame attempt at shock humor.

I've never felt this way about an episode before. By all accounts this is a deeply flawed episode with a cop-out ending but I kinda enjoyed it? I'm not going to write a review and score this episode yet since I still don't know what to think of it, but it's so bizarre and mad that it's kind of entertaining to see them go all the way with this premise.

I noticed a pattern with the episodes that have aired this week: they all leave me with a "lost" feeling. And that includes this episode. I have to say, it was rather... interesting. It was basically a parody of an acid trip when you take too much dr-[medicine]. While the fact that SpongeBob (and later the other characters) eating a rotten Krabby Patty to see Cuddle E. Hugs was gross, it was minimal and not in your face like in "To Love a Patty", so I don't mind it here. Cuddle E. Hugs was an interesting and adorable character, and I wasn't expecting the "twist" that the "E" in his name meant "eat". While the episode was light on humor, the bizarreness and weirdness is enough to boost it up to an 8/10. I really dig this "paranormal" turn season 11 is taking so far.

Amphitrite said:
I noticed a pattern with the episodes that have aired this week: they all leave me with a "lost" feeling. And that includes this episode. I have to say, it was rather... interesting. It was basically a parody of an acid trip when you take too much dr-[medicine]. While the fact that SpongeBob (and later the other characters) eating a rotten Krabby Patty to see Cuddle E. Hugs was gross, it was minimal and not in your face like in "To Love a Patty", so I don't mind it here. Cuddle E. Hugs was an interesting and adorable character, and I wasn't expecting the "twist" that the "E" in his name meant "eat". While the episode was light on humor, the bizarreness and weirdness is enough to boost it up to an 8/10. I really dig this "paranormal" turn season 11 is taking so far.
Click to expand...

The paranormal theme is definitely an interesting thing to notice! Sort of reminds me of how Season 7 also had similar paranormal vibes (even outside the Legends of Bikini Bottom, episodes like "Back to the Past" and "Hide and Then What Happens?" had more strange themes than the average episode). That being said, I am currently enjoying Season 11 a fair bit more.

Season 7 was paranormal in the sense that the jokes were invisible like ghosts.

Honest Slug said:
Season 7 was paranormal in the since that the jokes were invisible like ghosts.
Click to expand...