"Oh wait, I don't have a sister." Anyone remember that quote by Patrick?

This episode is actually really funny, you gotta love Sam in a way.

I didn't really care for this episode much. I never really liked it since its premier. I don't really know why though.

What's worse than an episode where Patrick's annoying? An episode with essentially two annoying Patricks!

Pinhead Larry said:
This episode is actually really funny, you gotta love Sam in a way.


How can a SpongeBob episode deserve hate? (Someone above said that..) Its like saying you hate SB...Anyways, I liked this episode, I thought it was funny and it might made a good impression to me because it aired for the first time here in Greece on January 14, 2012 and we actually adopted my little doggy Yuyi on January 12, 2012 and I was really happy these days...There were some funny moments as well...Patrick wasn't stupid as some people here claim him to be, he was just feeling upset because they hated his sister...but I do agree that this Sam was really overprotective, she wasn't really a bully to me eyes, just an overprotective sibling...I've seen situations like this in real life too. I am giving it an 8/10

I HATE THIS EPISODE!!! I hate when Big Sister Sam destroys both SpongeBob and Squidward's houses for no reason, leaving them homeless. SpongeBob and Squidward convinced Patrick to control her sister Sam, but instead, Patrick doesn't care about it. Patrick and Sam are both jerks in this episode. I rather watch 3 My Little Pony: Friendship is Magic sisterhood episodes (Sisterhooves Social, Maud Pie and Forever Filly) than this shitty episode because these episodes are bright and friendly, unlike this shitty, mean-spirited episode.

One thing I gotta say is that Patrick has to have the most destructive sister ever. And he's so oblivious about it! I think this one could have worked but the execution was very lackluster.

Patrick i thought you and me were friends! I HATE YOU IN THIS EPISODE! Yes this is my least favorite episode of the show there are so many things wrong here! 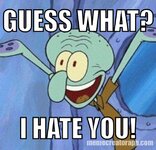