109b. The Krabby Kronicle

I always thought this episode was quite funny and well thought.

This is another episode I just find okay. I will admit that some of the headlines are funny (Mainly the Larry one), and it reminds me a lot of "Jellyfish Hunter", an episode I really like. However, what brings it down for me is Mr. Krabs. Unlike in "Jellyfish Hunter", where although he is a jerk, he still manages to be funny

and not overly irritating, here he is the exact opposite, and not only that, but he gets away with it in the end. The townspeople taking his money wasnt a satisfying enough ending to make up for what he did and him counterfeiting money. However, while he was annoying, there were some good parts to keep it from being bad, and while it is mostly meh, due to the good parts and Mr. Krabs canceling each other out. If you want to watch an episode that is very similar to this episode without the episode's antagonist getting annoying, I'd highly recommend the Hey Arnold! episode "The Big Scoop".

It wasn't that bad..I liked it, the ending was the most enjoyable, Mr.Krabs deserved the hate but again, how lucky he is, he found another way to invest money !!! Patrick marries a road sign...hilarious xP !!!!!! However, there were some parts on this episode that kind of disturbed me , like SpongeBob being so depressed, he's really sensitive!!!! But anyways, wasn't that bad as ''Plankton's Regular'' and I will give it an 8/10

This is my 39th least favorite episode.

And it's written by the unholy two, Casey Alexander and Zeus Cervas.

The Episode was ok, I love it, however the ending was eh but still Krabs learn his lesson... 7.5/10

Good episode but the ending ruined it...well, a little. The headlines were hilarious, especially "Larry the loser gets beaten up by pipsqueak" and "Local resident watches pole" :rofl:

i like the idea, but I don"t really like the execution. Patrick and the pole is kinda funny though... (Out of context that sounds so wrong)

Location
In the land of awesome cartoons.

This episode isn't that memorable, and Mr. Krabs drove SpongeBob to exhaustion (and this is after that sordid sister episode and once again I feel bad for SpongeBob- The writers are playing with our emotions!) The lies Krabs told SpongeBob to do wasn't that great anyway, but he got what he deserved- well, briefly anyway. 5.8/10

An actually good Krusty Krab episode in season 6? A miracle! This is a really solid episode, with funny moments, a good plot, and Mr. Krabs getting his comeuppance in the end. Also, I love episodes where SpongeBob turns against Mr. Krabs, so the episode sold me there. 8/10.

Location
At the Jellyfishing Convention

Like its sister episode, it's uncanny. It sets a horror-like vibe and personally, it's not a so bad it's good episode to me. It's just kind of cruel and is just bad. The ending is alright, though.

I wasn't a fan of this one. The plot, while not bad, isn't the best, and the execution was lackluster. The jokes are hit-or-miss, and Mr. Krabs gets "punished" for his actions. I wouldn't even call it a punishment really.

I never had strong opinions against the episode, nor too much for. When I first watched it it was around the start of season 6 itself I believe so I had already been used to the decline in quality from previous seasons in my opinion. I thought it was average or maybe above some others from there overall, I did like the idea of the plot though but the ending didn't feel satisfying aside from maybe seeing Mr. Krabs think of the idea for fake money for once though it wasn't executed well.
However, I found one gag to be pretty great, and still do. 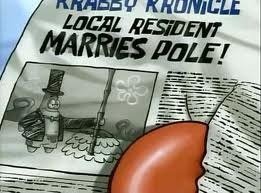 It's a large reason it stood out from the others for me aside from the concept.

Decent episode. I enjoyed all the different ways people's lives were ruined even if this episode wasn't too hilarious. The ending was pretty damn funny, how Mr. Krabs learns how to counterfeit. Not amazing or anything, but it kept my interesting.